Lord Krishna, the eight incarnation of Lord Vishnu was born on this auspicious day.

Janmashtami is one of the most popular Hindu festivals which is celebrated with much gaiety not only in India but abroad as well. The weeks leading up to the day are packed with festivities, from Eid, Rakhi, Independence Day to Navroz often falling close to each other. The Janm in Janmashtami refers to majestic birth of Lord Krishna, who upon growing up, played an instrumental role in the epic battle of Mahabharata. 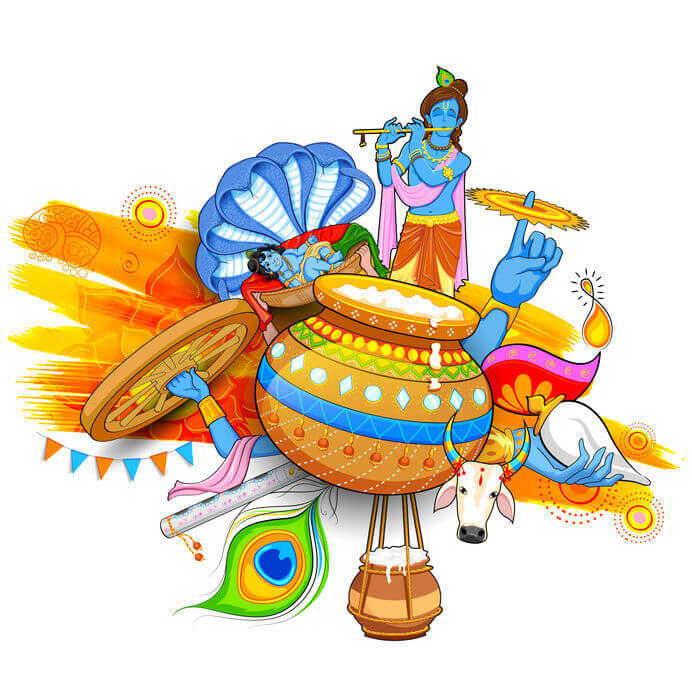 The monsoon in India is tied with myriad festivals. Lord Krishna was born at midnight on the eighth day (Ashtami) of the Krishna Paksha (dark fortnight) in the month of Shravana. Each year, the festival is celebrated with much fervour and enthusiasm to welcome their beloved ‘Nanhe Gopal’ to this world.

If legends are to be believed, on one such rainy night, little Krishna was born to parents Devaki and Vasudev in a Karaghar or prison. Devaki was the sister of cruel king Kans. On the day of Devaki’s marriage with Vasudev, the sky echoed with a prophecy.  According to the prophecy, the eight son of Devaki and Vasudev was to be the reason of Kansa’s death. Upon hearing this, Kansa threw both Devaki and Vasudev in a prison and one by one killed all of their six children. On the night of Krishna’s birth, a divine voice guided Vasudev to take little Krishna to his friend Nand’s house in Vrindavan. For the sake of his child’s life, he braved all storms and carried Krishna on top of his head to Vrindavan; and safely kept Krishna next to Yashoda and Nand. Vasudev returned with their girl child born on the same day to present her to King Kansa in the hope that he wouldn’t harm her since the prophecy said that their eight son would be the cause of Kansa’s death. However, Kansa was unwilling to show mercy, he threw the little girl against a rock. Instead of getting harmed she rose to the air taking the form of Goddess Durga and warning him about his death.

Krishna was raised by Yashoda, who loved and pampered him as his own son. Upon growing up, Krishna fulfilled the prophecy and relieved Mathura of all his cruelties.

To celebrate the birth of Krishna, many people install little idols of baby Krishna in their house. They bathe Krishna with honey, milk and water and dress him up in new poshaks(clothes). Some people also observe a ritual fast on the day of Janmashtami and break their fast at midnight.

Food and Prasad To Prepare For Janmashtami

Janmashtami has a fond association with food as Lord Krishna loved good food. There are many different kinds of Prasads that are prepared. Several different types of fruits and sweetmeats are offered to the God.

Since little Krishna was so fond of butter,a special type of Prasad Makkan malai or Makhan Mishri is also prepared on this special day by churning home-made white butter with some sugar. White butter, or ‘safed makhan’, is known to be little Krishna’s favourite.

On the pious occasion of Janmashtami, a special bhog of makhan mishri (sweetened white butter) is offered to the deity. To make this prasad, all you need is unsalted milk cream and some mishri daana. Mishri adds a sweet taste to the prasad. The prasad is said to be complete when a holy basil leaf is added to it.

Some people also prepare the special chappan bhog to please the deity. Once Krishna, had to lift mount Govardhan  under which the people of Vridnavan took refuse to save themselves from the torrential rains sent across by an angry lord Indra. He stood their lifting the mountain on his little finger for eight days straight. Once the rain subsided, the women of the village treated him with a special bhog consisting 56 kinds of food. Some of the popular constituents of chappan bhog are makhan mishri, kheer, rasgulla, jalebi, rabri, mathri, malpua, mohanbhog, chutney, murabba, saag, dahi, rice, dal, kadi, ghewar, chila, papad, moong dal ka halwa, pakoda, khichadi, brinjal ka sabji, lauki ka sabji, poori, badam milk, tikkis, cashews, almonds, pistachios, and namkeen.

Of all the prasads prepared during this pious day, Dhaniya Panjiri is also considered to be one of the most important prasads.

Dhaniya Panjiri is popularly prepared during Janmashtami in Northern India, especially Punjab and Uttar Pradesh. It is made from coriander seed powder, bhoora (powdered sugar), ghee, chopped almonds, raisins, cashew nuts and mishri. All you need to do is to roast the seeds and grind them in a blender and make a powder, leave it slightly coarse. Add ghee in a pan and saute the powder in ghee until it turns brown. Transfer the coriander panjiri on a plate and let it cool and then add sugar to it. Mix well and add dry fruits to it.

Dhaniya Panjiri is not served as it is, but it is often served with Charnamrit, a sweetened drink and sliced bananas. Charnamrit is made with yogurt, powdered sugar, coconut, chiraunji and makhane. It is a light drink that helps you take the panjiri without it sticking to your mouth. The significance of this prasad not only remains religiously important but is also healthy. No wonder it is used widely as an offering across the country during Janmashtami.

Makhana paag is a delicious delicacy that is traditionally prepared on the festive occasion of Janmashtami. Made with lotus seeds, ghee, milk and bhoora (powdered sugar), makhana paag is a part of the chappan bhog thali, which comprises 65 items.

Charnamrit is a sweet and milky concoction, which is distributed among devotees as part of prasad. Made by blending milk, yogurt, ghee, honey and liquid jaggery together, charnamrit, also known as panchamrit, is also used to bathe the feet of Lord Krishna’s idol.

Kheer is usually prepared on Janmashtami and offered to Lord Krishna at midnight after the puja is done. Made from rice and condensed milk, kheer is extremely appetising and is quite easy-to-prepare as well. Garish it with grated almonds and pistachios and your Janmashtami prasad is ready.

thank you to NDTV for the information

Browse all of our Recipes for Krishna Janmashtami here.